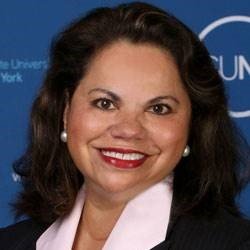 Johanna Duncan-Poitier is the Senior Vice Chancellor for Community Colleges and the Education Pipeline for the State University of New York (SUNY), host organization for the NYS Student Success Center. She provides system oversight and coordination for SUNY’s 30 community colleges that educate more than a quarter of a million students with an annual operating budget of $1.8 billion. In her dual role, she also provides leadership to strengthen STEM education, teacher preparation, and connections between SUNY’s 64 campuses and New York State’s Pre K–12 schools and business leaders to improve college readiness, completion rates, and prepare a highly qualified workforce.

At SUNY, she has raised over $90 million in state, federal and private funding for workforce development and student success initiatives. In addition to her responsibility for community college executive searches, she led the launch and development of major statewide collaborative projects including the SUNY Empire State STEM Learning Network; the State Workforce Development Consortium; the scale-up of the Carnegie Foundation for the Advancement of Teaching Math Pathways; the scale-up of co-requisite English pathways; the designation of New York State as one of 17 Jobs for the Future (JFF) Student Success Centers; the launch and system expansion of Guided Pathways across 28 campuses; the national Strong Start to Finish (SSTF) award to scale-up first year student success strategies; and, the Smart Scholars Early College High Schools and P-TECH programs. Johanna Duncan-Poitier also serves as one of the National Commissioners of the Education Commission of the States (ECS) representing New York State.

Prior to joining SUNY, she served as the Senior Deputy Commissioner of Education P-16 for the New York State Education Department (NYSED), and was responsible for regulatory oversight of the 700 school districts, all NYS public and private colleges and universities, and the preparation and licensure of 225,000 teachers and 750,000 licensed professionals in 47 health, business, and design professions. Before joining NYSED, she provided campus-based leadership for the City University of New York (CUNY) at Queens College, York College, and Bronx Community College.

Senior Vice Chancellor Duncan-Poitier has received multiple leadership awards, and, most recently, was named as the 2021 Outstanding Continuing Educator of the Year by the Continuing Education Association of New York (CEANY). She earned a B.S. from Queens College (CUNY), an M.S. degree from Bernard M. Baruch College (CUNY), and has received two honorary degrees including a Doctor of Laws from Saint Joseph’s College and a Doctor of Humane Letters from D’Youville College.